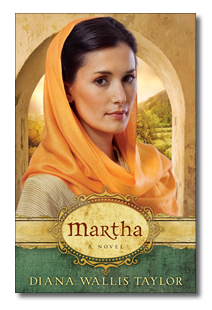 Martha watched her father walk slowly up the road as the afternoon shadows appeared, and he was smiling.  Ephraim looked tired but pleased. At his raised hand of greeting she hurried to meet him.  Bursting with curiosity, she nearly danced beside him as they returned to the house. A dozen questions whirled in her head but she knew her father would tell her in his own time.

He looked past her.  “And where is Mary?”

Martha swallowed her impatience. “She helped me in the garden this morning. I asked her to wash the vegetables.” She hoped the task was done, for Mary, at ten, was a dreamer and easily distracted from her tasks.

Ehpraim put a hand on her shoulder. “You are teaching her well, daughter.”

She beamed at his praise, but her question tumbled out in spite of her good intentions. “You have news, Abba?”

He smiled and nodded, his eyes twinkling.  “My offer is being considered and they will let me know soon.  I believe I presented you in a most favorable light.  Phineas is a worthy young man and an only son.  He is strong and helps his father in the fields.  Gera and his wife Rhumah are good people. You would have a pleasant home.”

Martha could hardly contain her excitement.  She was fifteen and her father had gone to arrange a marriage for her.  She could soon be betrothed. Reaching up, she put a hand on her father’s cheek. “Thank you, Abba.  When will we know?”

Her dark eyes sparkled as she looked up at her father. She knew she was taller than most of the other girls in Bethany, nearly reaching her father’s shoulder.  She’d bound up the auburn hair that flowed in gentle cascades down her back, under her shawl. While she turned a few heads when she walked through the village, her father told her many times, “Beauty does not run the home, daughter, only skillful hands.” Her hands were indeed skillful, for she had learned to help her mother in the household duties when she was even younger than Mary.

Her father tipped her chin up with his finger.  “Gera told me we will talk after the Sabbath.”

Martha sighed.  She would just have to wait.

It had been two years since her mother died. She did her best to care for their home. Her father and Lazarus helped as they could, but the burden fell on Martha. Her father hadn’t remarried. She worried about the pains in his stomach that troubled him from time to time.

“I fear I’m a poor risk for a husband—a man given to weak spells, with three children,” he told her upon more than one occasion.

Martha knew of two women in Bethany who had indicated they might be interested, but Ephraim would not commit himself. Perhaps now, if she were to be betrothed, her father would consider taking a wife to be a mother to her ten-year-old sister Mary, and twelve-year-old brother, Lazarus. Yet, even as she thought of this she felt a twinge of guilt. When her mother’s mantle as the woman of the household had fallen on her shoulders that dark day, she had promised to take care of her brother and sister. It seemed so urgent at the time. If she married and left, would she be breaking her promise?