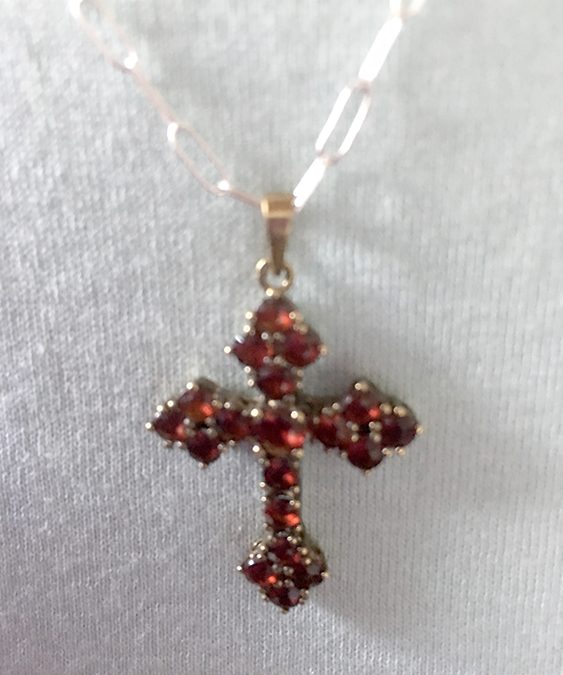 Years ago, on my 30th birthday, my grandmother presented me with a beautiful old cross made up of Bohemian garnets. Garnet is my birthstone. It was 150 years old according to the date on the back of the cross. I kept it in a safety deposit box as one jeweler told me it was worth about $750.

One day when I was speaking, a group who was also on the program were sharing about jewelry and they offered a 20% discount on an appraisal. I took them my cross. When they hesitantly called and told me I could pick up the cross, I felt apprehensive. The cross turned out to be paste, red glass. The Russian Countess my grandmother bought the cross from had fled the Russian revolution as did many of the Russian nobility. Many of their jewels went with them but many were paste. It was a disappointment to be sure, for I’d had the cross for over 40 years! I sent it to my daughter who wanted it for sentimental value and she put it in storage for my oldest granddaughter.

Today, after lunch with friend Liz, we went to the same jewelry store where she had bought a small garnet cross two weeks before. I wished I had bought it but then her birthday is in January also and I was happy for my friend. This day there was another garnet cross, much larger, with silver and other décor. She liked that one and so I bought it and we agreed to trade crosses! I got the little garnet cross I liked and she got one she liked. All’s well that ends well, right?