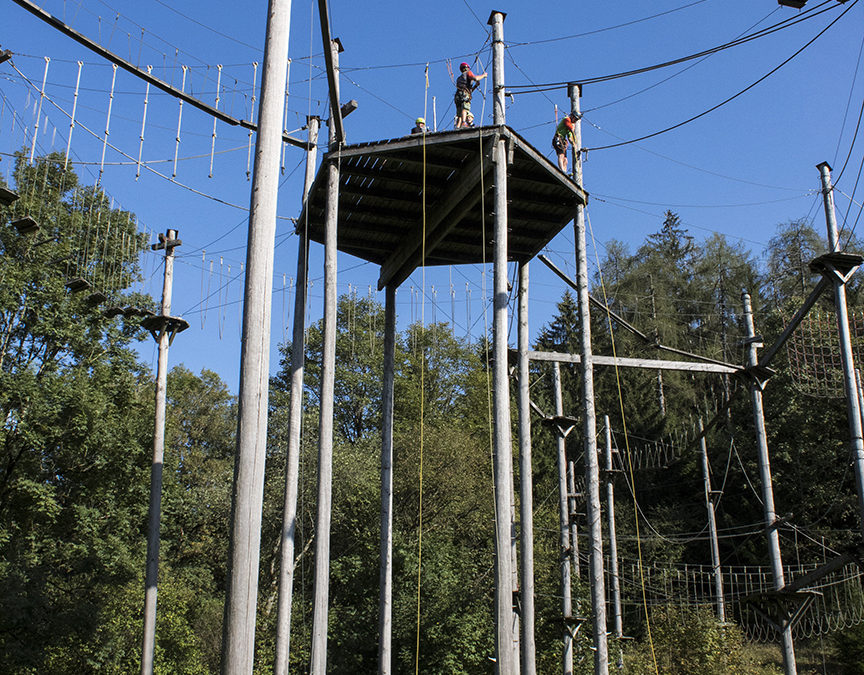 I recently attended a women’s retreat at the Pine Valley Retreat Center in the mountains above San Diego. A friend of mine was also going so I looked forward to the event. She asked me if I signed up for the High Ropes Course and I had, not having any idea what that entailed. She had also signed up and so we headed up to the mountains, bright-eyed and bushy tailed. Another long-time friend lives in Pine Valley and we were able to stop and visit with her for a short time. Dinner was great, five camps in the large dining room so lots of activity and plenty of good food! After a great meeting and teaching, we turned in, excited about what the next day held. After the music and teaching time on Saturday, those of us who had signed up, headed for the High Ropes Course to see what it was about. I should have been a little wary at the harness and detailed instruction on how to hook on to the wires as we proceeded around the course, but then I’ve been zip lining 3 times so felt like an old hand. That is until I saw what we had to do – climb a 60 foot pole with footholds, get on to the platform that seemed more like 100 feet in the air, and get hooked up to the wire for the first venture which was around 30 feet of ropes and wire. I watched our pastor’s wife (who is a lot younger than me), go all the way around the four wires before zip lining down. Several women got part-way up the pole and shook their heads, climbing back down again. When it was my turn I had about 30 seconds to decide whether at my age I should be climbing 60-foot poles! I ignored the voice of reason and started climbing. It took a lot of strength and will power! I made it to the top, but my left leg was starting to cramp and so I had another decision to make. The other three parts of the course would have to wait until another day but I still had to cross the first 30 foot section to get to the zip line, which was the only way back to the ground unless I wanted to climb back down the pole. Decided that was not an option and with more courage than good sense, I made my way across the first section and to my relief got to the platform. The zip line was actually fun compared to what I just did. That evening, those that attempted the course even part way were applauded, and then they decided to give special recognition to the “oldest” member of our group for doing even part of the course. Me! I felt like Methuselah! I texted my kids and my daughter said, “Way to go, Mama!” My oldest son said, “You kick — Mom!” and my youngest son said, “I tried to call you, but you were probably out hang gliding!” I’ll stand on my laurels!