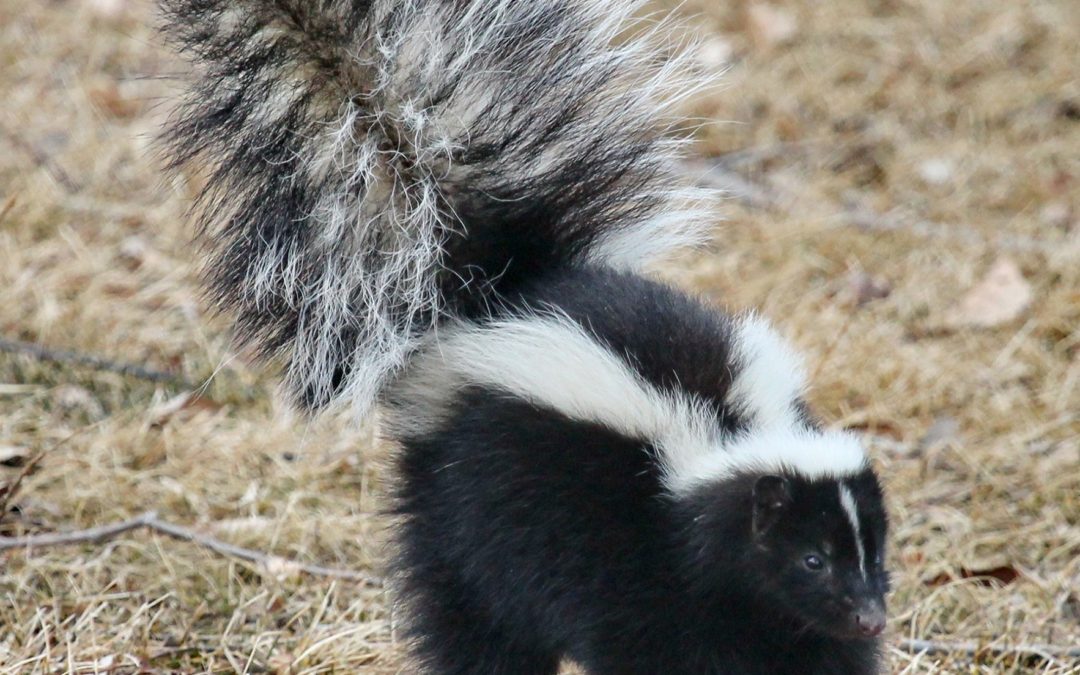 Like many people, I love any small creature. Watching nature is a national pastime. While I think most baby animals are adorable, even baby skunks, I draw the line at a full-grown critter! Our backyard is well fenced. Five-foot boards and 18” of lattice work on top. Pretty secure, or so I thought. I have a small dog who is young, and she thinks every creature is there to play with. The first inkling we had a problem, was a baby skunk in the corner of the yard at 2:00 am. Maya barked and barked, but the baby skunk was more interested in climbing into the bougainvillea than spraying. I thought it was just an unusual incident. The next time, the skunk (bigger one) was trying to get between the steps from the porch and the lattice work that blocked entrance. Once again, I got Maya in the house with no spray. Then we found one running beneath the deck. How were they getting in this yard? Ah, a small hole under the fence by the side gate! Then evidence it had burrowed under the latticework that is around the deck (supposedly to keep critters out.) It had made a home under my house. I blocked the hole by the fence, but my industrious little friend just pushed the rocks out of the way. Ha! This was war! I got a piece of hardware cloth and after pushing some dirt and rocks in the way of the hole under the deck and the one under the fence (so I could tell if it had gone out) I waited until about 9:30 pm. With a flashlight I checked the hole under the latticework. It had pushed the small amount of dirt and rocks aside. The dirt was swept back from the hole under the fence so I knew he/she had gone out to the street, probably to look for a meal. I smoothed the dirt by the fence and laid down the hardware cloth, securing it with three bricks. The next morning, one of the bricks had been slightly moved but the skunk was not able to dig through the hardware cloth. Yay! I won!  The next day my handyman dug out the hole by the fence and filled it with concrete. Under the house, he found the skunk had chewed through the small gate that closed the opening under the house and a good portion of the wood. Some insulation had been pulled down but no sign of any baby skunks. When all was repaired and secure I felt like a warrior who had won a battle. A small one to be sure, but victory is sweet!